Ten months after I began working at my first law firm as a file clerk, the firm acquired a small New York firm to expand its practice in the northeast. All of the acquired firm’s client files then needed to be integrated into our firm’s conflicts, filing, and docketing systems.

The task was gargantuan, so my boss appointed me to accompany her to New York to get the job done. We spent two weeks in those dusty New York file rooms inputting information into our computer system, generating new labels, and organizing all of the files according to our firm’s standards.

But there was a great perk: the hotel where we stayed sat in the heart of Manhattan and we had a weekend between the two work weeks to explore. Talk about fun!

I was twenty-three and had never been to New York. It was October, so she and I enjoyed crisp fall weather, ate at great restaurants, and spent our free weekend visiting the Empire State Building, taking in a Broadway show, and visiting the Statue of Liberty and Ellis Island.

Even though the work was tedious, being appointed to go to New York was one of the best experiences of my working career. Why tell you this?

Because you and I have been appointed by God.

He chose us as branches for His vineyard and appointed us to bear fruit that lasts. Our work in His vineyard may be tedious at times, but it is rooted toward His mission from the very start. Our effectiveness as His missionary fruit-bearer rests in Jesus, the true Vine, working in and through us.

Jesus willingly set aside the privileges of heaven for over thirty years to invest Himself in disciples who would continue His message following His death and resurrection. As soon as Jesus began calling disciples to become fishers of men, their appointed work was not classroom study but active practice.

During three-years of earthly ministry, Jesus taught us that workers of all vocations were to be laborers in the vineyard (John 4:36).

Jesus sent the disciples into the world with the specific mission to witness what God had done in Jesus, not to be preservers of man-made traditions which can divide.

Our effectiveness as His disciples (branches of the true Vine) rests in Jesus’ working through us. And even though Jesus’ hands-on discipleship training was confined to His earthly ministry, He appoints us without reservation to a worldwide ministry.

When Jesus ascended to heaven He sent the Holy Spirit ─ just like He promised ─ so that we could carry out the Great Commission. Being chosen by God means that you and I are part of Team Jesus. Now, as part of His team, we have been appointed.

For instance, I was chosen to be an employee of the law firm. However, once an employee, I was then appointed to go to New York to help set up the new office. Being appointed is specifically task-based.

You and I are chosen to be branches in His vineyard, but each of us is appointed to complete varying tasks within. His vineyard.

When He created each of us, God gifted us with certain abilities and skills. When He appoints us to specific tasks He provides the opportunity to grow and to develop those skills. All disciples are grown and matured to bear fruit for the glory of God, and the sweetest fruit comes from our areas of God-given giftedness.

What abilities and skills has God given you? How are you leveraging them to bear fruit for His glory?

For example, I have served as a vocalist in my church’s music ministry. However, don’t ever ask me to run anything technical. That is definitely not my gift. I am pretty sure that I would short circuit the whole church and plunge us into darkness.

Yet when God brings all technical and vocal arts to work together, each appointed in their areas of giftedness, He creates beautiful music to draw people to glorify Him.

Being appointed is not something to fear but a privilege to embrace as we go about doing His work.

I pray that God uses both to strengthen and to grow your gifts as you bear fruit for His glory. 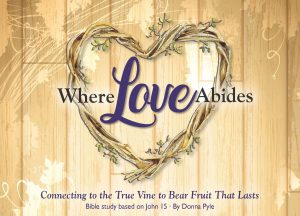